I know using corn as animal feed isn’t good for cattle. That is why I don’t feed corn to Happy, our milk cow or the steer we are raising.  But what about goats? They are ruminants too, I know. By nature they are made to digest more than just grass. Goats are considered browsers, like deer and enjoy a variety of plants, leaves and bark included in their diet. But corn?

We offer our goats lots of hay and a supplement from the feed store that is a specific grain mix just for goats. One of the things in the mix is cracked corn. So yes, in small amounts, I offer corn to my goats. Back to my original question. Should goats eat corn?

Daisy waiting to be fed.

This post is part of Simple Lives Thursday blog hop hosted by GNOWFGLINS, Culinary Bliss, and A Little Bit of Spain in Iowa. 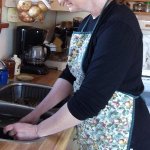 Today is an intense kitchen day. I barely have time to tell you about it. I got way behind on cheesemaking over the holidays. The clutter of jars in the fridge is driving me crazy!

Yesterday I made mozzarella and put the curd in the fridge, so today I will do the stretching. The ricotta has been drained overnight and this morning I salted it and put it in the freezer. I put 2 1/2 gallons of milk on the stove to make cheddar and I’ve got the yogurt maker going.

Wait, there’s more. I have 5 quarts of cream warming to room temperature so I can make butter. And a pot of chicken bones simmering into broth. Today’s eggs still need to be cleaned and put away. Must get my son to empty the compost pails. I’ll have to have this all finished and cleaned up in time to start supper (which I haven’t figured out yet). Maybe if I get it all done, I can take a break from the kitchen tomorrow?

Do you ever feel like a slave to your kitchen?

This post is part of Simple Lives Thursday blog hop, hosted by GNOWFGLINS, Culinary Bliss, and A Little Bit of Spain in Iowa.

One of the things I wanted to try after getting a milk cow was make cheese! I was encouraged by Wardeh’s post at GNOWFGLINS on homemade raw cheddar cheese, so I tried it. I thought I didn’t have much to lose, after all I’m getting 4 gallons of milk a day. 😯 The first time I tried it, I over cooked the curd and it turned ‘corky’. That’s okay! I figured that out and tried again. The second time, all I can say is WOW. Sooooo good!

In one recipe, I started with 2 ½ gallons of milk and that turned into 2 ½ pounds of cheese. All the curds fit comfortably into my homemade cheese press.

Cheese presses are so expensive. I did a little research and decided we could make our own. Hubby made the frame for me. Do you recognize what the cheese mould is? It’s a hamburger press. I found it at the thrift store for 50 cents. I used a crayon to mark a grid on it and a soldering iron to melt the holes. The tray that collects the whey was also from the thrift store, also 50 cents. There are different styles of the same thing out there. Dh drilled a hole in the tray so the whey could flow out. I position a pail, sitting on a stool to catch the whey. A little basic but it works. The frame, dh made for me was made out of material we had, except for the dowel which was $3.40. Total cost of cheese press: $4.40

I can’t wait to try some different cheeses! I don’t know which ones yet, there are so many different kinds!

I'm Marg (hard g) and this is snippets of my farm life on the Canadian prairie. I was born and raised in the city, then married the love of my life and we moved to the country. That was 26 years ago, we've raised 3 boys and an assortment of animals. We're still figuring things out as we go and always learning something new as we work towards a more self-sufficient life.
Join 61 other followers